Currently, most machine-learning-related business cases are solved as a classification problems. Classification algorithms are so well studied in practice that even if the original problem is not directly a classification task, it is usually decomposed or approximately converted into one.

However, despite its simplicity, the classification task has requirements that could complicate its production integration and scaling. E.g. it requires a fixed number of classes, where each class should have a sufficient number of training samples.

In this article, I will describe how we overcome these limitations by switching to metric learning. By the example of matching job positions and candidates, I will show how to train metric learning model with no manually labeled data, how to estimate prediction confidence, and how to serve metric learning in production.

What is metric learning and why using it?

According to Wikipedia, metric learning is the task of learning a distance function over objects. In practice, it means that we can train a model that tells a number for any pair of given objects. And this number should represent a degree or score of similarity between those given objects. For example, objects with a score of 0.9 could be more similar than objects with a score of 0.5 Actual scores and their direction could vary among different implementations. 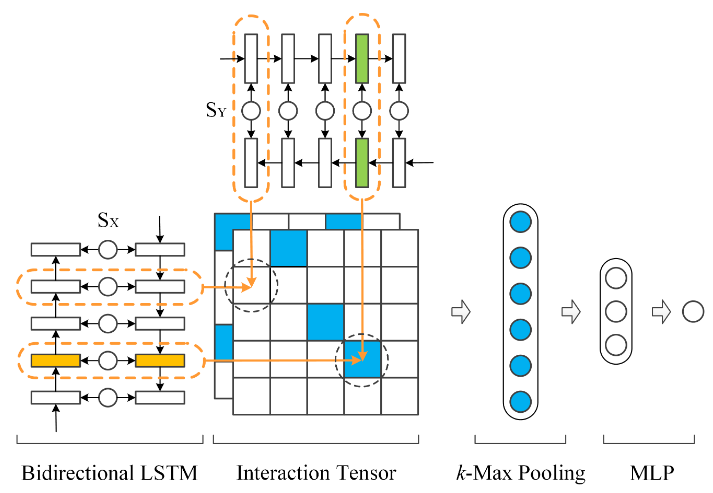 The second is the representation-based approach. In this case distance function is composed of 2 components: the Encoder transforms an object into embedded representation - usually a large float point vector, and the Comparator takes embeddings of a pair of objects from the Encoder and calculates their similarity. The most well-known example of this embedding representation is Word2Vec.

The Comparator is usually a very simple function that could be calculated very quickly. It might be cosine similarity or even a dot production. Two-stage schema allows performing complex calculations only once per object. Once transformed, the Comparator can calculate object similarity independent of the Encoder much more quickly. For more convenience, embeddings can be placed into specialized storages or vector search engines. These search engines allow to manage embeddings using API, perform searches and other operations with vectors.

Pre-trained NNs can also be used. The output of the second-to-last layer could work as an embedded representation. Further in this article, I would focus on the representation-based approach, as it proved to be more flexible and fast.

In our case, business goal was to find suitable vacancies for candidates who specify the title of the desired position. To solve this, we used to apply a classifier to determine the job category of the vacancy and the candidate. But this solution was limited to only a few hundred categories. Candidates were complaining that they couldn’t find the right category for them. Training the classifier for new categories would be too long and require new training data for each new category. Switching to metric learning allowed us to overcome these limitations, the resulting solution could compare any pair position descriptions, even if we don’t have this category reference yet. 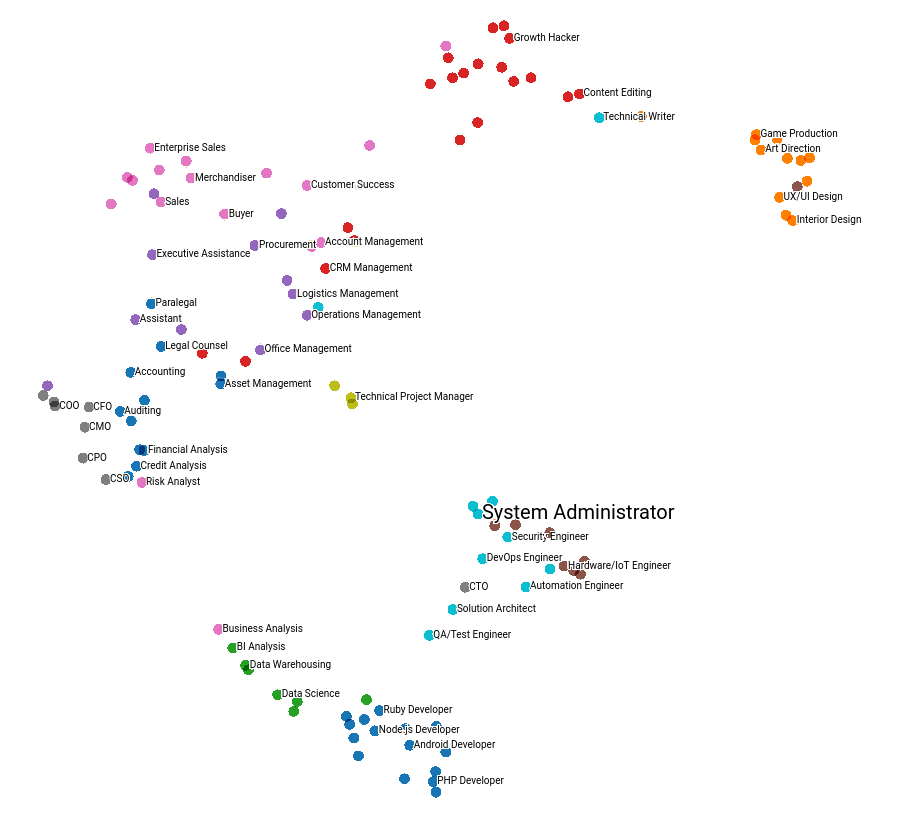 T-SNE with job samples, Image by Author. Play with Embedding Projector yourself.

Unlike classifiers, a metric learning training does not require specific class labels. All that is required are examples of similar and dissimilar objects. We would call them positive and negative samples.

The good news is that the division into classes is only a special case of determining similarity. To use such datasets, it is enough to declare samples from one class as positive and samples from another class as negative. In this way, it is possible to combine several datasets with mismatched classes into one generalized dataset for metric learning.

But not only datasets with division into classes are suitable for extracting positive and negative examples. If, for example, there are additional features in the description of the object, the value of these features can also be used as a similarity factor. It may not be as explicit as class membership, but the relative similarity is also suitable for learning.

In the case of job descriptions, there are many ontologies of occupations, which were able to be combined into a single dataset thanks to this approach. We even went a step further and used identical job titles to find similar descriptions.

As a result, we got a self-supervised universal dataset that did not require any manual labeling.

Unfortunately, universality does not allow some techniques to be applied in training. Next, I will describe how to overcome this disadvantage.

There are several ways to train a metric learning model. Among the most popular is the use of Triplet or Contrastive loss functions, but I will not go deep into them in this article. However, I will tell you about one interesting trick that helped us work with unified training examples.

One of the most important practices to efficiently train the metric learning model is hard negative mining. This technique aims to include negative samples on which model gave worse predictions during the last training epoch. Most articles that describe this technique assume that training data consists of many small classes (in most cases it is people’s faces). With data like this, it is easy to find bad samples - if two samples from different classes have a high similarity score, we can use it as a negative sample. But we had no such classes in our data, the only thing we have is occupation pairs assumed to be similar in some way. We cannot guarantee that there is no better match for each job occupation among this pair. That is why we can’t use hard negative mining for our model. 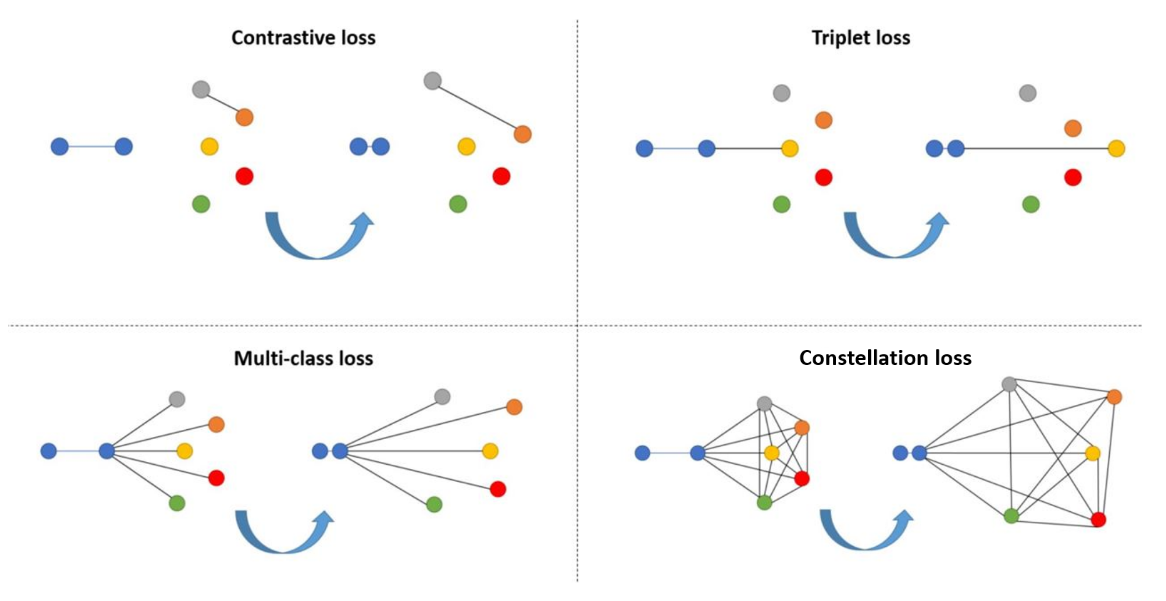 To compensate for this limitation we can try to increase the number of random (weak) negative samples. One way to achieve this is to train the model longer, so it will see more samples by the end of the training. But we found a better solution in adjusting our loss function. In a regular implementation of Triplet or Contractive loss, each positive pair is compared with some or a few negative samples. What we did is we allow pair comparison amongst the whole batch. That means that loss-function penalizes all pairs of random objects if its score exceeds any of the positive scores in a batch. This extension gives ~ N * B^2 comparisons where B is a size of batch and N is a number of batches. Much bigger than ~ N * B in regular triplet loss. This means that increasing the size of the batch significantly increases the number of negative comparisons, and therefore should improve the model performance. We were able to observe this dependence in our experiments. Similar idea we also found in the article Supervised Contrastive Learning.

In real life it is often needed to know how confident the model was in the prediction. Whether manual adjustment or validation of the result is required.

With conventional classification, it is easy to understand by scores how confident the model is in the result. If the probability values of different classes are close to each other, the model is not confident. If, on the contrary, the most probable class differs greatly, then the model is confident.

At first glance, this cannot be applied to metric learning. Even if the predicted object similarity score is small it might only mean that the reference set has no proper objects to compare with. Conversely, the model can group garbage objects with a large score.

Fortunately, we found a small modification to the embedding generator, which allows us to define confidence in the same way as it is done in conventional classifiers with a Softmax activation function. The modification consists in building an embedding as a combination of feature groups. Each feature group is presented as a one-hot encoded sub-vector in the embedding. If the model can confidently predict the feature value - the corresponding sub-vector will have a high absolute value in some of its elements. For a more intuitive understanding, I recommend thinking about embeddings not as points in space, but as a set of binary features.

To implement this modification and form proper feature groups we would need to change a regular linear output layer to a concatenation of several Softmax layers. Each softmax component would represent an independent feature and force the neural network to learn them.

Let’s take for example that we have 4 softmax components with 128 elements each. Every such component could be roughly imagined as a one-hot-encoded number in the range of 0 to 127. Thus, the resulting vector will represent one of 128^4 possible combinations. If the trained model is good enough, you can even try to interpret the values of singular features individually.

Machine learning models rarely train to 100% accuracy. In a conventional classifier, errors can only be eliminated by modifying and repeating the training process. Metric training, however, is more flexible in this matter and allows you to introduce additional steps that allow you to correct the errors of an already trained model.

A common error of the metric learning model is erroneously declaring objects close although in reality they are not. To correct this kind of error, we introduce exclusion rules.

Rules consist of 2 object anchors encoded into vector space. If the target object falls into one of the anchors’ effects area - it triggers the rule. It will exclude all objects in the second anchor area from the prediction result. 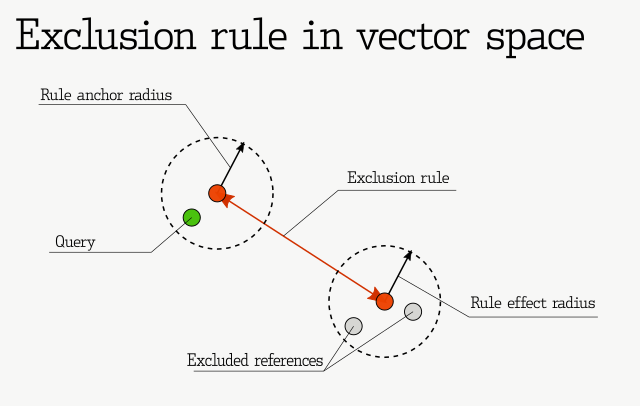 The convenience of working with embeddings is that regardless of the number of rules, you only need to perform the encoding once per object. Then to find a suitable rule, it is enough to compare the target object’s embedding and the pre-calculated embeddings of the rule’s anchors. Which, when implemented, translates into just one additional query to the vector search engine.

When implementing a metric learning model in production, the question arises about the storage and management of vectors. It should be easy to add new vectors if new job descriptions appear in the service.

In our case, we also needed to apply additional conditions to the search. We needed to filter, for example, the location of candidates and the level of language proficiency.

We did not find a ready-made tool for such vector management, so we created Qdrant - open-source vector search engine.

It allows you to add and delete vectors with a simple API, independent of a programming language you are using. You can also assign the payload to vectors. This payload allows additional filtering during the search request.

Documentation with examples could be found here.

In this article, I have shown how metric learning can be more scalable and flexible than the classification models. I suggest trying similar approaches in your tasks - it might be matching similar texts, images, or audio data. With the existing variety of pre-trained neural networks and a vector search engine, it is easy to build your metric learning-based application.

Learn when and how to use layer recycling to achieve different performance targets.
August 23, 2022 | Yusuf Sarıgöz

We will update you on new features and news regarding Qdrant